Stay up to date with all of the latest news with SZapp!

What an action packed few weeks we have had since our first newsletter.

Every morning the students enjoy their daily fitness by running around the oval....

....then enjoy cooking with Ms Lulu

Congratulations to those students who have completed their student reward cards. Well done!

What matters? That was the theme for this year’s Mardi Gras event in Sydney. Last year I was invited to join with Haka For Life(HFL) to dance in Sydney at the Mardi Gras parade. This year I chose to take my family with me. As a proud Wiradjuri man from western NSW I am always honored to be asked to perform a Corroboree or dance for my people. Haka For Life is an organization who stand against suicide especially for indigenous cultures. I have been involved with them through Corroboree For Life (CFL) for the past 3 years.

This year also saw the first ever smoking ceremony before the Mardi Gras Parade. It hasn’t been done in the 42-year history of Mardi Gras. My family and I were asked to join in this ceremony and the pictures show my little ones immersed in the smoke prior to the parade.

Suicide doesn’t discriminate and either do we. Indigenous people are 7 times more likely to take their own lives then non indigenous people. The rate is even higher amongst the LGBQTI Indigenous community. HFL has had a float in the past two years to take a stand and raise awareness for suicide prevention. HFL is a Maori group whom perform the Haka and they always pay respect to the local indigenous peoples of Australia. They will never perform without Aboriginal people dancing before them.

This year I was blessed to be involved with the Gadigal People of the Eora Nation on which the Mardi Gras parade took place. My family and I lead the HFL float and my kids were amazed at the amount of people watching them. Over 300,000 people lined the streets and millions more watched online and tv around the world.

What matters? Everyone matters and as such what mattered to me was to show my family that we can use our culture to show people that they matter. We were embraced by all and had an amazing time in Sydney for this year’s Mardi Gras parade. 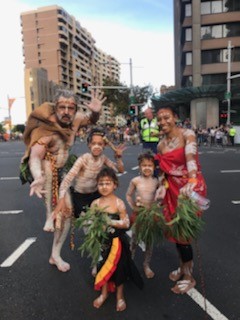 It was very pleasing to be able to award our students for work well done at the assembly in week 3.

This was followed by a shared afternoon tea. 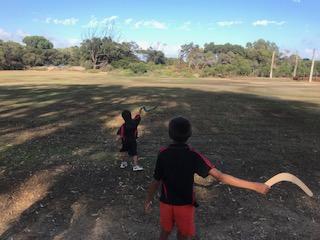 Our pet kangaroos enyoyed the camp as well

18 Chapman Road
Geraldton WA 6530
Support Network
Provide advice and assistance when you are experiencing difficulties to help you solve problems or to stop them getting worse.